The Bravas sales team from across the country met in Dallas this week with a full agenda emphasizing the breadth and depth of the Bravas brand with the goal of encouraging collaboration between the different locations. CEO Ryan Anderson and the management team topped off the event with the announcement of the Bravas Award winners. 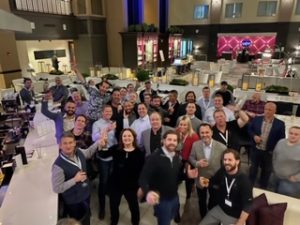 Jeff Halloran from the Dallas location was recognized for Sales Leadership.

Both Keith Brown from the Dallas location and Richard Randazzo from the Boca Raton location were named Best Supporting Team Member.

Kyra Winsky from the Philadelphia location was awarded the Rising Star honor and Jason Rutledge from the Dallas location received the Rookie of the Year award.

And the top five sales awards went to:

Eric is the founder of Catapult Communications, offering brand awareness and sales strategies to strengthen clients' go-to-market offerings. He is also the co-founder and publisher of Technology Designer Magazine, Website and e-newsletter. Presently a Consultant to CTA’s i3 Magazine. Past recipient of The Torch of Liberty Award by the ADL. Eric also Co-chairs the Annual ADL Consumer Technology Dinner. Launched CEWEEK, an event for innovative companies to meet the press, retailers and investment community. Eric, also launched Future Vision which was an Executive Level event designed to build relationships that yield future business.