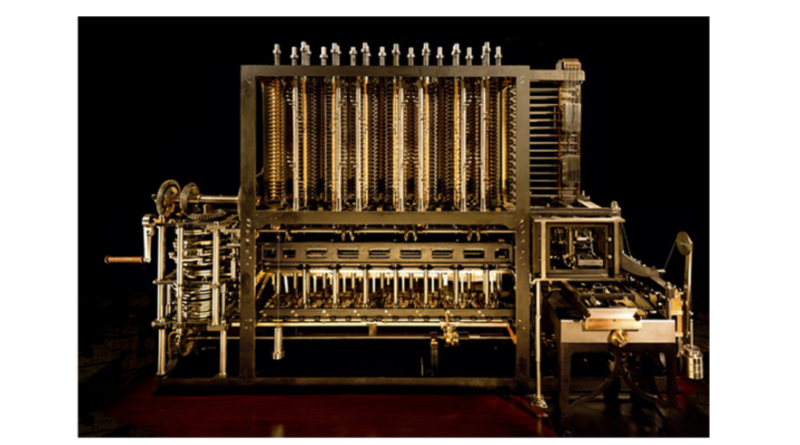 In 1821 (that’s right! 1821), a certain Charles Babbage, a member of the Analytical Society at Cambridge University in England, was extremely disappointed in the quality of math education at the college. This is not shocking, since Charles Babbage was disappointed in so many things.  No question Mr. Babbage was a genius, but he was also an obnoxious snob and really despised the common man.  He was sort of a less lovable Sheldon Cooper (from TV’s Big Bang Theory).  He was often dismissive of those with less natural ability than himself.  That being said, Babbage was an exceptional mathematician, inventor, mechanical engineer and was always extremely keen on exploring different issues within the world of mathematics.

As the story goes, as a student at Peterhouse College, Cambridge, Babbage was involved with others in assembling a table of logarithms. Smart guy that he was, he continually was discovering errors in the other students’ calculations.  Which I’m sure he took pleasure in pointing out those errors over and over again.  And in one of those moments of inspiration – Babbage wondered if it were possible to systematically arrive at calculations by the use of a machine.  And get this – a steam-powered machine!

His imaginative and revolutionary thinking started to come into focus in 1822 with his ‘difference machine’, which he envisioned would mechanically compute calculations. Unfortunately, Babbage got on poorly with others (as I mentioned earlier) and often had trouble expressing himself and where his research was heading. That led to poor fundraising, which in turn led to many aborted attempts at completing his difference machine.

But here’s the crazy thing about Charles Babbage, in 1991 a ‘difference engine’, exactly built to Babbage’s specifications was proven to work. Not only that, but a printer Babbage specified was also built and that worked, too. And although Babbage’s difference machine was mechanical in nature, it was eerily analogous to today’s computers – separated memory (think disc drives), Input/Output (IO) functionality (think connectivity), and a dedicated control device (think ‘mouse’).

To make a long story short, Charles Babbage won a Gold Medal from the Royal Astronomical Society in 1824 for his invention of an engine for calculating mathematical and astronomical tables. (Being the ornery guy that he was, he refused a knighthood and baronetcy!). He never really realized a fully functioning, completely reliable, programmable computational device in his lifetime, but he is remembered and considered to be the Father of Computers. So I guess it’s true, nice guys finish last and jerks can end up being the Father of Computers.