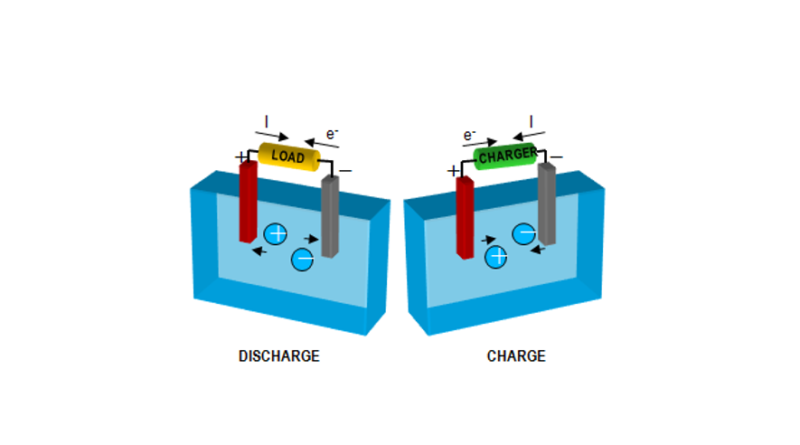 Batteries can be an extensive and complicated subject. Batteries have become the backbone of our technology driven world. From phones to solar grids, you need to store energy and then deliver it free from artifact to sensitive microprocessors. For this article, I want to provide a basic primer to prepare readers for more in-depth articles in the future.

Battery Chemistries:
Lithium Ion – There has been a lot printed, both good and bad, about lithium ion batteries. You should know that there are a variety of different lithium chemistries available, all with their own set of strengths and weaknesses. Some cycle better than others, some are smaller and lighter than others, and some are safer than others.

Lead Acid – The oldest and least expensive battery chemistry. It is heavier than lithium chemistries and does not have the same cycle life, particularly in deep discharge applications. However, it is significantly less expensive and, in general, far safer than any other battery chemistry.

There are many other chemistries that are currently in use or are being developed, but that discussion will have to wait for a different article. If anyone is interested in a particular chemistry, I would be happy to address it as a post.

The question you should be asking is “Why can’t a battery be designed that does all of these things?” The answer is science, safety and money. In today’s world a system designer has to consider the application, the power requirement, the environment and the budget in order to make the appropriate battery choice.

Lastly, a brief note about battery specification sheets – in my experience they are written more as marketing pieces than technical specs. In many cases, you really have to dig to find useful comparative information. I believe the battery choice is best left up to the team that designed the device.

Amp Hours – Batteries are rated in Amp Hours, sometimes expressed as just amps. A 100 amp battery rating means it can discharge 100 amps for one hour. If it is a 12 volt battery it can also be referred to as a 1.2 kilo watt battery (Watts = Volts x Amps).  Not all 100 amp hour batteries are the same.  Some batteries can only discharge at a 10 amp rate, but can do so for 10 hours.  Other batteries can only discharge at higher rates.  The spec is only useful if you know the discharge rate.  (In most cases, you have to really comb the spec sheets to find this information)

Battery Strings – A group of batteries wired together to produce a certain amount of voltage.

BMS – Battery Management System. A device that manages the charge and discharge rates within a string of batteries or cells. It maintains a consistent state of charge from battery to battery or cell to cell.

Cells – The smallest component of a battery. Cells are grouped together to make a battery of a certain voltage.

Charge Controller – A device that manages the charge voltage and current so that a battery is not overcharged.

Cut Off Voltage – The minimum allowable voltage. If is this voltage that generally defines the “empty” state of the battery.

Cycle Life (number at a specific DOD) – How many times a battery can be charged and discharged before it is no longer useful.

Depth of Discharge (DOD) – How much of the total available energy has been extracted from the battery.  Usually measured as a percentage.

Discharge Rate (expressed as E) – How quickly you can discharge a battery, relative to its capacity, without compromising safety or cycle life. The Tesla 10 kWh power wall is rated at E/5. That means it can be discharged at no more than 2 kW and maintain its cycle life.

Energy Density – How many watts can be stored per unit of volume.

Usable Energy – Amount of energy that can be used while maintaining the stated cycle life.

Joseph Piccirilli is an accomplished consultant, strategist and speaker with a 40-year career that spans the consumer electronics, systems integration and energy industries. In his current capacity as Executive Director at RoseWater Energy Group, he oversees the manufacturing, sales and distribution of leading new technology for residential power storage and handling efforts.