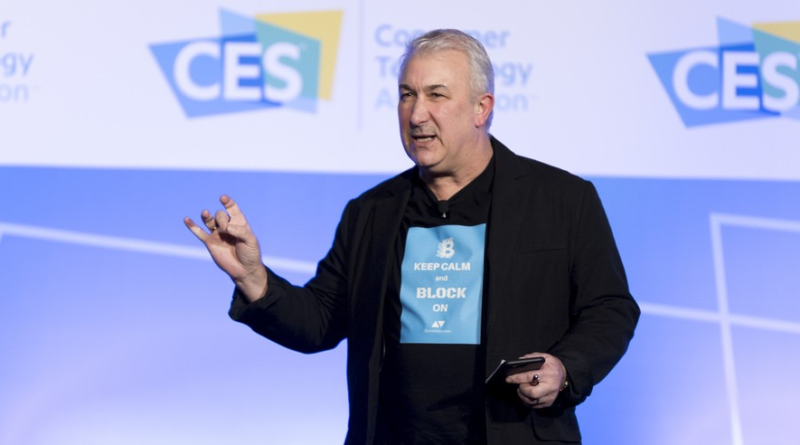 Please welcome our newest contributor, Andrew Vorster. We met Andrew at CES 2018 and once we started talking about “things”, it became apparent that he’d be a unique voice within the TIG community. He is the former VP of Technology R&D at Visa Europe, and now spends the bulk of his time tracking changes in TIPS – Technologies, Innovations, Patents and Startups, contemplating the impacts and implications these will have on society, industry and the individuals within. Weaving these into credible and colourful narratives, he inspires audiences and clients thereby igniting their innovation initiatives. We know you’re going to enjoy his commentary.

That was my opening line as I walked on stage to moderate the “100 uses for a Blockchain” panel in front of the slightly stunned audience of the Digital Money Forum held at CES recently. From the thunderous applause that immediately erupted, I believe I had just said out loud what most of them were thinking anyway …….

As evidence, please allow me to submit the Blockchain customer reward program announced by the CEO of Chanticleer Holdings (the owners of a number of burger joints in the USA) where in a press release he stated:-

“Use your Merit mined by eating at Little Big Burger to get a buffalo chicken sandwich at American Burger Co., or trade them with your vegan friend so he can get a veggie burger at BGR. And that’s just the beginning.”

You “mine Merit” by eating burgers????? NO!!!! You earn rewards – just like you have always done – and there is absolutely NO reason to put this on a blockchain.

That, my friends, is quite frankly some Grade A marketing b*ll*cks right there!!!

Chanticleer’s stock rose by almost 50% as a result of the announcement (<facepalm>) – proof positive of the hype and hysteria surrounding anything to do with blockchain right now – the problem for me being that this obscures possible genuine use cases for the technology from emerging into the limelight.

I’m certainly no crypto expert but having led innovation initiatives across a wide array of industries over the last 30 years, I’ve seen my fair share of technologies and concepts come and go and I constantly track and advise on the potential applications and implications of technologies for my clients. As a result, I have gone out of my way to try to understand where blockchain technology could be applied most effectively and I have a deep interest in surfacing genuine use cases in order to apply to parallels in my clients’ businesses.

There are undoubtedly certain aspects of the technology, for one it’s “immutability”, that render it suitable as a “system of record” that could establish the provenance of something in a supply chain – for example proving that the fish in your supermarket is from a sustainable source or the medicine provided by your chemist is from a reputable source or that the diamond in your engagement ring is not a blood diamond – to my mind, all genuinely useful applications of blockchain technology.

The “decentralised” aspect of the technology is often stated as a core reason for its adoption by blockchain evangelists, but this is an area I frequently end up questioning. You will note that I said “decentralised” and not “distributed”. You see, we have had “distributed database technology” for many years and it works just fine. The idea behind a “decentralised” network is that there is no central point of control or administration – which I totally get when it comes to the public blockchain but many of the blockchain projects I’m hearing about lately involve a “private blockchain” – which to my mind is simply a “shared database” as the participants will have to abide by the rules and (centralised) control of the organization providing the blockchain – in these cases I relentlessly ask what the benefit is of using blockchain technology over plain old shared database technology with strict audit controls and I’m normally answered with an admission that a plain old database would have done just fine – but that wouldn’t justify the ICO they are planning…..

The ICO – this is the one that rings the biggest alarm bells for me lately – is the only reason they are implementing a blockchain because they see it as a license to (literally) print their own money??

I really don’t know how the VC’s and angels are making decisions at the moment. I have no idea if they are exceedingly clever or just plain crazy – but I am in desperate need of a Blockchain BS detector in the form of a simple flow chart that ends in either….

“Yes, this is an appropriate application of blockchain”

In the meantime ……… I’ll just leave this right here.

One thought on “Blockchain BS”