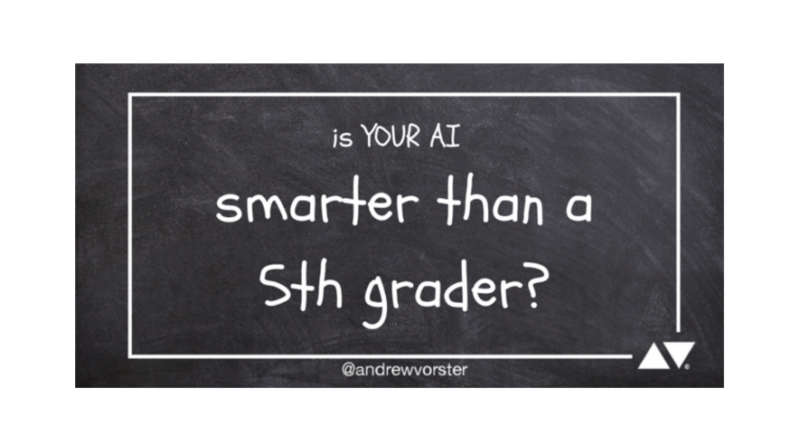 Gartner predicts the global business value of Artificial Intelligence (AI) will reach $4 trillion by 2022.  AI is most certainly this year’s hot topic in the Consumer Electronics Industry – but most of what I’ve seen isn’t very intelligent …….

My personal litmus test for AI has become “is it smarter than a 5th grader?”

Hiking the halls of CES earlier this year it seemed that the majority of product marketing departments found it necessary to include AI as a selling point for their product, no matter how tenuous the connection was.

I favour the following definition of AI found in Wilkipedia:-

“Colloquially, the term “artificial intelligence” is applied when a machine mimics “cognitive” functions that humans associate with other human minds, such as “learning” and “problem solving“.

Perhaps I’m just being pedantic as the term “AI” in common use encompasses “robotic process automation” (RPA) – the automation of mundane tasks that we humans get easily bored with – like folding laundry for example – but this doesn’t really require much “intelligence” now does it? Sure, it requires immense amounts of compute power and the application of really good image recognition from an extensive database, but I taught my kids to fold their own laundry way before the fifth grade and I don’t need a $16,000 robot to do it for me! (At that price it should iron the damn laundry AND put it away for you ……)

Image recognition as a form of AI was widely applied to a range of “AI enabled” stuff that nobody really needs in their life – I mean SERIOUSLY – who needs a carry on suitcase that uses facial recognition to follow them through the airport??? I repeatedly attempted to get a video of the suitcase in action and laughed out loud when it repeatedly decided to follow somebody other than who it was supposed to be following. I don’t know about you but my kids were able to recognize my wife and I in a crowd pretty much by the time they could crawl around ……

Something else that my kids never needed an AI to help them to sleep better …….nope, sleeping sort of came naturally to them, even if parenting didn’t come naturally to us at first! Could an IoT device be a helpful assistant? I’m sure it could – but labelling it as an “AI” is a bit of a stretch in my book …..

“Conversational AI” was also everywhere. Again, this is a very narrow field of “intelligence” which the purists would call “Natural Language Processing” (NLP). This is the next step up from those awful automated telephone response systems we put up with for so many years where the software on the other side can now understand sentences and (restricted) snippets of conversation as opposed to just single words like “help” or “bill pay” etc. I’m sure you’re probably familiar with Siri, Alexa, Cortana, Hey Google and the many voice assists that make use of NLP to give your phone or your smart home superpowers – but embedding any of these into an $8,000 beach umbrella doesn’t automatically make it an “Artificial Intelligence”!!

The World Economic Forum  asked “Could artificial intelligence soon become conscious?” – something that Bill Gates, Elon Musk, the late Stephen Hawking and a host of folk over at the Singularity University have been worried about for some time. This poses a huge number of moral and ethical questions that society will have to grapple with and ones for which I personally believe we are ill prepared or informed.

Up until recently, my response to the above question would have been “probably not in my lifetime” – but I’m no longer confident in this.

Last year, Sundar Pichai (CEO of Google) gave a demo of their “Google Duplex” smart assistant making a phone call to a real person in order to book a hair appointment. The call contained all the messy ambiguity of an everyday human conversation and went far beyond “simple” NLP. If you haven’t seen the 2-minute video yet, take a look:

I think the bar has just been set for conversational AI – how does yours stack up?