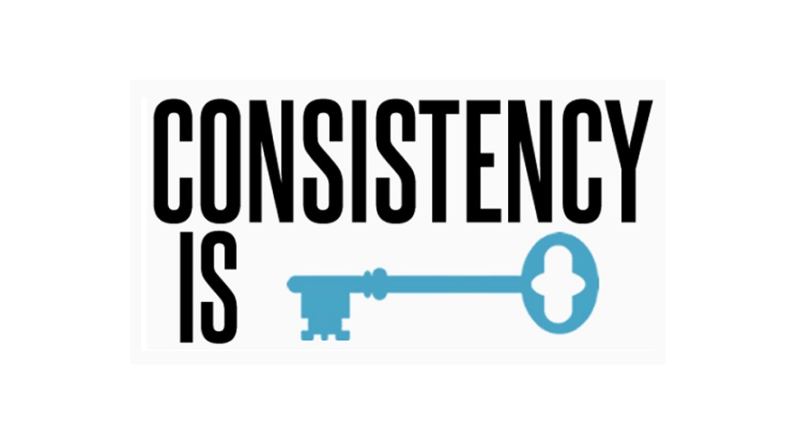 A recent journey on a well-known airline provided a perfect example of just how easy it is to have your vision totally dismantled by the inability of those involved to execute on it.

I had taken an overnight flight that departed late in the evening and arrived at an early hour after crossing multiple time zones – I’m sure you’ve all been there, you get woken up two hours before landing and you’re cranky from lack of sleep, parched from lack of liquid and hungry for no real reason as you had been fed a few hours previously. But your mind is telling you that since the sun is above the horizon you must have missed breakfast.

The aromas emanating from the gallery made my tummy rumble and by the time the steward placed a “Breakfast Bruschetta” in front of me, I was eager to get stuck in even though I’d never previously had “scrambled egg on toast” described in this way. The beautiful packaging set my expectations high. 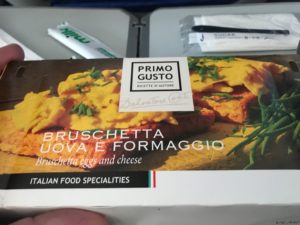 The Chef’s vision for his masterpiece was most certainly lovingly crafted to clearly demonstrate that airplane food need not be the disaster that so many of us associate with flying.

What happened next, immediately inspired this very blog post!

The passenger next to me opened his breakfast box, gave an audible snort of disgust and immediately snapped it shut. In fact, he was so offended by the sight of the contents that he proceeded to unfold his napkin and carefully place it over the top of the box so that he could no longer see any of it.

I looked at him and he just rolled his eyes and slumped back in his seat.

I cautiously opened mine, not knowing what to expect – I certainly didn’t expect ……… this:- 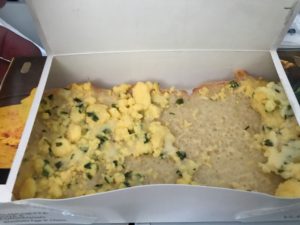 I’m not sure at what point in the flight the plane managed to perform a triple somersault or barrel roll – there really wasn’t any other explanation for the positioning of the scrambled egg (the staff couldn’t have dropped the entire tray hopper on the floor could they??) – but then, given the dismal proportion of egg to bread, there really was never any way for it to have covered the bread in the first place!

The “bruschetta” was mostly soggy, with the exception of the very bottom, which had the engineering properties of steel reinforcing. This I discovered when trying to remove it from the packaging in order to ascertain if it was edible (I told you I was hungry!!). What is not obvious from the photo is that the bread is the exact size of the bottom of the packaging – but opening the top flap left an inch or two of packaging on each side, meaning the aperture to remove said bread was a couple of inches smaller than the bread – a serious packaging design flaw! I stopped stabbing the bread with my plastic knife when it snapped in half and I splattered mushy remains of scrambled egg all over the gentleman next to me, but I wasn’t going to give up (hungry remember?). In the end I completely dismantled the packaging (another near splatter incident) and finally managed to remove the contents.

I shouldn’t have bothered ……….

After a few bites I decided that I didn’t need an expensive trip to the dentist and if I continued I’d certainly break a tooth or two. I gave up and taking the lead from my fellow passenger, I unfolded my napkin, covered the offending remains and slumped back in my chair defeated.

My mind turned to how this episode relates to so many of the technology exhibitions and demos I have experienced in my time. The designers carefully curate the stand or demo to showcase their products which always work flawlessly, of course. Customers are lured in by the promise (illusion??) of a magical experience that will satiate their appetite for a friction-less experience and their hunger for new things drives them to dig deep into their wallets.

But the realization of that vision in the hands of the customer is dependent on so many unknowns and variables – suppliers, installers, transportation and logistics, incompatible protocols and unusable interfaces.

Just how many remote controls and apps do you need to control every single aspect of your “smart home” right now? I personally have three different “hubs” and two different smart speaker platforms that each can only partially communicate with the plethora of smart devices across multiple protocols from a variety of different suppliers. I have a total of five different apps to use to configure various settings across all of the above and I’m getting to the stage that I was in my story above where I’m almost ready to give up and slump back in my chair, defeated.

Like my fellow passenger, my wife snorted in disgust a long time ago and just doesn’t bother ……….

Are you doing enough to ensure that the reality of your customers’ experience matches your vision?

Or are your customers going to end up with a lap full of scrambled egg?